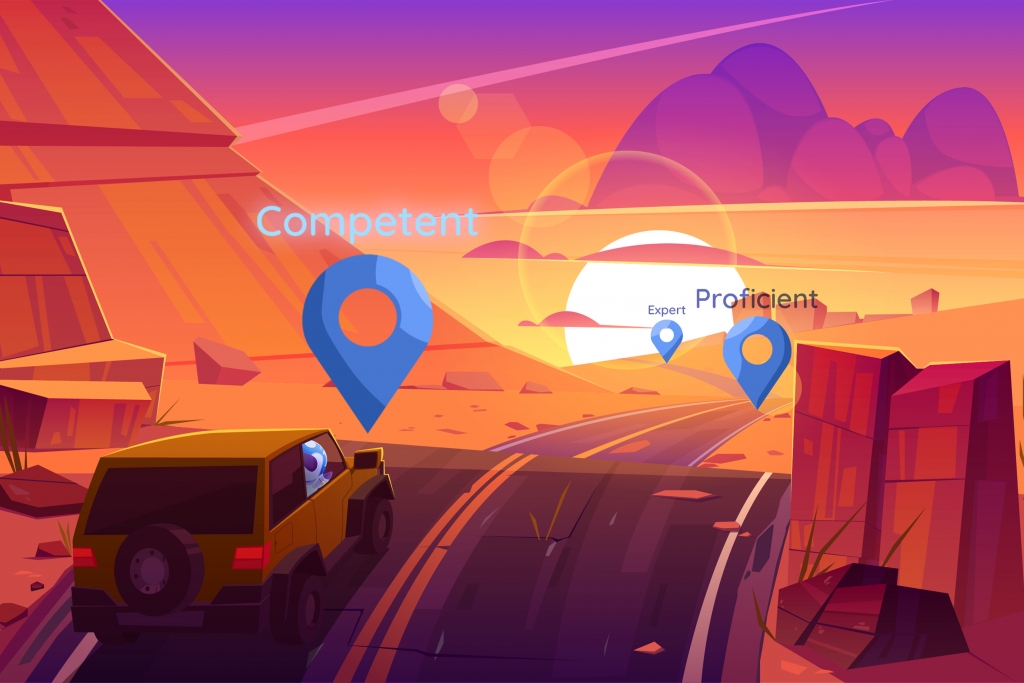 Competency-based Learning: why, what and how?

1. Components of a competency-based approach ⚙️

2. The perfect competency framework does not exist 🤔

3. Capturing the variety of learning moments 👩🎓

6. In short, everything starts with the “why”🧬

What’s complicated about competencies and skills in general is that no one has a clue on how to approach them holistically. Systematically rationalizing competencies within an organization in a “competency-based learning” approach is complex and requires methodical thinking.

It can be hard to get started because you don’t know where to begin. It can be even harder to move forward because all the existing models and approaches seem to have significant limitations (ROME, ESCO, KSA and others…).

Beyond the concept of competency itself, which is not new, “competency-based learning” is gaining more and more momentum. It is seen as a resolutely forward-looking approach. Indeed, the job-specific approach alone is becoming obsolete as jobs become increasingly protean whereas the competency-based approach appears more agile, flexible.

In this article, we discuss this approach, how to get started and how to take full advantage of it.

Born out of the realization that being able to rationalize competencies and skills in the complex context of a company is and will be a competitive advantage, this emerging discipline of the L&D function specializes in developing and improving a framework for systematically streamlining competencies within a learning ecosystem.

While it was once and for a long time historically possible to model competencies intuitively within groups or communities with some accuracy, sociologists and psychologists agree that, above 100 individuals, it becomes much harder if not impossible to do so. Increased numbers and complexity have progressively overtaken our ability to rationalize skills intuitively. Complex hierarchical systems have therefore rapidly appeared to rationalize competencies between the different levels (team, departments, business units…) of the company, the (in)famous “competencies and jobs frameworks”.

The result of the increased complexity of modeling skills and the subsequent hierarchies that arose have locked learning in an approach based on means (time spent, number of contents made available, % of active users, attendance… which are much simpler to evaluate) whereas learning had, historically, almost always been based on results and outcomes.

One of the main challenges of competency-based learning is therefore to return to an outcome-based approach and this requires (1) the implementation of a competency framework, (2) the ability to develop competencies according to this framework, (3) the ability to assess them meaningfully and (4) a technical architecture (data, functional, interoperability) capable of supporting the approach.

2. The perfect framework does not exist 🤔

Unfortunatly no! The magic competency framework that solves all your problems doesn’t exist and probably won’t for a while. This makes the implementation of a framework in a company a thorny issue.

There are two options regarding its choice and implementation and one has to carefully analyze the concrete needs and onjectives in order to obtain the desired benefits in terms of individual development plans, matching needs with skills availability, improving key processes or other business objectives.

On the one hand, there are “one-size-fits-all” frameworks whose characteristics may suit the company’s general needs, on the other hand, the company can build itself a framework that is in line with its challenges.

One is simpler and faster but does not necessarily cover all the needs in a relevant way. The other requires more resources, but may allow to get more out of a competency-based approach.

A few questions to ask yourself:

Tip: Keep it simple and go small for a consistent approach based on your objectives!

Whatever your need is, you should seriously consider building your own framework. There is nothing stopping you from getting help and inspiration or from taking parts of one-size-fits-all frameworks that fit your needs or part of your needs, but having your own framework will help you maximize the impact it will have on the business. Also, if you keep it simple, a competency-based approach can be fairly quick to deploy.

There are different aspects of your framework that you can play with to simplify things for your context and needs. A fully comprehensive framework might not be necessary and could even be counter-productive.

For example, you can choose a small number of mastery levels (3-4) of a competency and increase it as your approach develops. And rely on your local managers to make this breakdown.

You can also choose to focus only on certain populations or professions that represent a significant portion of the company’s workforce and for which it is necessary to map competencies in greater detail.

You can also map the competencies by limiting yourself to a key word (even if a sentence is probably better since it is more descriptive).

3. Capturing the variety of learning moments 👩🎓

It seems clear that in competency-based learning, “formal” content will only take us so far. This is why a competency-based approach also requires access to a wide variety of learning moments. It is not the time spent behind a MOOC that constitutes competence but all those moments where we read, listened and saw, where we tried, failed and learned from our mistakes, where someone gave us feedback, where we became a coach or mentor…. While it seems complicated to rationalize everything, many of these moments can be captured in an ecosystem logic allowing for a deeper analysis (xAPI and LRS for example).

While it is important to have a wide variety of learning moments, it is also important to know how to organize and disseminate them according to competency objectives. Recommendation engines can be used.

The learning culture can be used to amplify many learning moments such as mentoring, coaching, peer-to-peer learning, communities of learners, project sharing, feedback… which are an important part of experiential learning and therefore skill building.

If there are critical functions that it is normal to evaluate finely thanks to precise scales, for more general competences, it is good to rely on a more human approach that relies on the appreciation of experts, peers, managers or other trainers… They have indeed a crucial role to play when it comes to developing the competences of their collaborators and teams and they are the ones who are best placed to evaluate (appreciate) the competences of their collaborators.

Moreover, we don’t evaluate a skill, we evaluate a level of mastery of a skill because this level is linked to operational tasks that the person can or cannot do.

Tip: Give plenty of oppotunities for practice and experimentation

Practice, trial and error, experimentation are of course essential and it is important to promote them in your ecosystem. Learners must be able to try, fail and learn, get feedback from business experts or managers, find and participate in real projects… so that we have more elements to assess skills. And even if the assessment is not perfect, it doesn’t matter, it is the sum of the assessments and the data collected at the global level of a company, which will allow to identify the trends and the strategy.

This is probably the most important part, the one without which we will truly move forward with our eyes closed in the already dimly lit room of competency management.

First, because it’s the data and the data analysis capabilities that will drive your approach. If the first question to ask when considering a competency-based approach is, “What is my goal with this approach?”, the second would be, “How do I measure potential progress relative to that goal?”. The pedagogical and evaluation part of the approach is only a way to get data to answer this second question.

Learning analytics means answering a third question: “What results did I get? We talk about that in this article.

Secondly, because without a data architecture capable of supporting the device, there is no device. In particular, an ecosystem approach can greatly help an enterprise make sense of all this data by trying to set a framework (like the xAPI and cmi5 standard) between the various data exchanges.

An iterative approach can be a good way to gradually build a data-driven approach. It allows you to gradually improve the approach and the analysis framework. If things are done in the right order, things will happen naturally over time.

6. In short, everything starts with the why 🧬

For a successful competency-based approach, you must always start with a concrete organizational objective, a business strategy and, above all, accept that you will not do things perfectly the first time.

From the choice, to the creation, of the framework to the implementation of the analysis framework, it is the business objective(s) that will condition the entire development of your competency-based training system. And this is also where the interest lies at a time when L&D departments are increasingly being asked to be “HR Business Partners”.

A platform with which to grow, at your own pace

I want a demo

Bealink is a learning platform that allows you to optimise the skills development of your employees and to develop a learning organisation thanks to its multi-modal and fully integrated approach.

Bealink is a learning platform that allows you to optimise the skills development of your employees and to develop a learning organisation thanks to its multi-modal and fully integrated approach.